The Securities and Exchange Commission (the “Commission”) is on the verge of a November 5, 2019 rulemaking regarding the shareholder proposal process, driven by a well-funded disinformation campaign by the Business Roundtable (BRT), National Association of Manufacturers and U.S. Chamber of Commerce (“Chamber”). Below we provide a reality check on the myths and materially misleading interpretations and statements being proliferated by those organizations. Many investors have previously submitted information to the Commission, including the docket of the Proxy Process Roundtable, correcting each of these myths.

Myth: The shareholder proposal process is costly or distracting.

Reality: The shareholder proposal process is one of the least costly ways of alerting companies and their investors to emerging issues and improving governance.

Most shareholder proposals seek to warn a company and its investors about emerging issues relevant to the firm’s long-term sustainability, and/or to improve governance, disclosure, risk management or performance. The evidence strongly supports the market’s conclusion that such actions are value creating, and can provide an early warning of issues that may portend bankruptcy or lost opportunities.

•   A study of climate change disclosures, one of the most common issues raised in shareholder proposals, shows that engagement through the shareholder proposal process improved companies’ disclosure of climate change-related issues, and that such climate change disclosures increased market valuation of those companies.[1] A recent study[2] that looked at 847 engagements with 660 companies around the globe over a decade (2004-2014) found that successful engagements — those that did improve environment, social and governance (ESG) performance — were correlated with higher sales growth without changing profitability. Moreover, a portfolio of firms that were engaged by shareholders outperformed a matched portfolio of companies that were not engaged by 4.7 percent.
Another study[3] which examined 2,152 ESG engagements at 613 publicly traded firms over a decade (1999-2009), also found that the companies that were the subjects of these engagements had higher abnormal returns of around 1.8 percent during the year following the engagement, and the successful engagements were associated with higher abnormal returns of 4.4 percent over the following year (and zero for the unsuccessful ones).
•   The Commission’s shareholder proposal rules, including recent staff implementation, have stringent regulatory guardrails to prevent proposals from diverting attention to trivial matters. In particular, the recent emphasis on requiring the topic of a proposal to be relevant and “significant” to a company prevents a trivial proposal from surviving the no-action process.

•   The shareholder proposal process is far less costly than alternative processes for raising similar issues. When shareholders are unable to effectively engage investee companies using proposals, they are required to fall back on other strategies including voting against directors, lawsuits, books and records requests, litigation, and requests for additional regulations.

•   The Business Roundtable has dramatically exaggerated the cost to companies. This includes efforts to exclude proposals, as well as the costs of publication and opposition to a shareholder proposal. Any costs associated with seeking the exclusion of shareholder proposals through the SEC’s no-action process are voluntary expenditures by companies.

•    In the end of the process, most proposals are advisory in nature.  Even if a proposal’s recommendations are supported by a majority of shareholders, the board and management are not legally mandated to take any action in response.

Reality: The shareholder proposal process is working steadily, within guardrails provided by SEC Rules. It is an effective tool for protecting investor interests, as reflected in rising levels of voting support for environmental, social and governance proposals.

•  The most significant change in recent years is a surge in voting support by investors for both governance and environmental or social issue proposals. The success of the existing shareholder proposal process in providing opportunities for investors to support improved corporate governance and performance on social and environmental factors is a poor justification for a rulemaking to constrain the process. 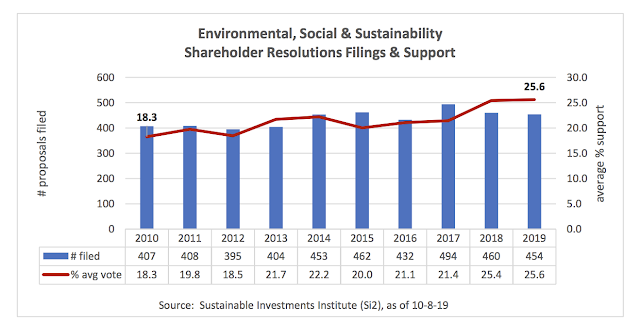 The existing rules require that a new shareholder proposal win at least 3% voting support to be reintroduced after it has been voted on. To be reintroduced a second year requires a 6% vote in favor, and after a third year, requires a 10% vote. The BRT and Chamber have advocated a sharp increase in these thresholds -- 6% the first year, 15% the second year, and 30% the third year.

• In practice the BRT proposed thresholds, under consideration by the Commission,  would have barred numerous successful proposals in recent years from the opportunity to win support. Proxy access provides an illustration. A proxy access proposal, (granting investors the right to nominate board directors to appear on the proxy) received 4.4% support the first year it was filed at Netflix (2013), but won a majority vote when refiled two years later (2015). The Board finally enacted proxy access in 2019. The same patterns applied at Cisco and Citigroup, where support jumped significantly from below 6% when the proposal was first filed (2014: 5.4% Cisco, 5.5% Citigroup) and then winning huge a majority of support in a second filing (2015: Cisco 64.7, Citigroup 86.9%). Cisco adopted proxy access in 2016, and Citigroup in 2019.

•  The change in thresholds would undermine the ability of shareholder proposals on emerging issues to gain support over time. From 2011-2018, shareholders re-filed only 74 proposals (out of thousands of proposals) that had garnered less than 6% support at their first presentations at annual meetings. Eight of those 74 proposals, or roughly 10%, earned substantially larger support the second time they were submitted, including several that achieved majority support when submitted a second time. The continuation of a total of 74 proposals during this timeframe in order to allow 10 of them to garner significant support is not inappropriate; it represents a functional marketplace of ideas.

• Many proposals that garnered substantial support upon re-filing would have been excluded if the second and third year thresholds were raised to 15% and 30%. Among governance proposals from 2011 to 2018 this includes: six for an independent board chair (UMB Financial, American Express, AutoNation, Chevron, Wendy's, and KeyCorp), twelve proposals seeking disclosure of political contributions or lobbying payments (Wynn Resorts, Allstate, Republic Services, Nike, FedEx, Express Scripts, Charles Schwab, IBM, Citigroup, Verizon, UnitedHealth Group, and Devon Energy), three proposals urging One Share One Vote (Alphabet, United Parcel Service, and Telephone and Data Systems).  Shareholders who were prepared to support these proposals upon the re-filing would have been denied their rights to do so if re-filing thresholds had been increased, especially if third year resubmission thresholds exceeded twenty percent.[5]

•  The corporate trade associations assert that proxy statements are crowded with “zombie” proposals rejected by shareholders year after year. But in reality, submissions of proposals for a third or fourth time are very rare. From 2011-2018, shareholders resubmitted environmental and social issue proposals only 35 times after receiving votes under 20% for two or more years. Over this past decade, this affected only 26 companies. Only one third of the proposals that received less than 6% support when submitted the first time were resubmitted a second time. This small number of resubmissions does not justify a rulemaking or change in the resubmission threshold.

•   Poorly performing proposals are already screened out by the current thresholds.  In 2019 shareholders consistently provided less than 3% support to proposals seeking an ideological litmus test for board members at Discovery, Starbucks, Apple, Twitter and Amazon. Shareholders at Exelon similarly rejected a proposal to “burn more coal” with only 1.6 percent support. Investors also rejected a request to report on how Gilead Sciences spent its share of the federal tax cut, a proposal that earned only 2.2%. These proposals would be barred from resubmission.

Myth: The viability and legitimacy of shareholder proposals can only be evaluated according to whether they are supported by a majority of shareholders.

Minority shareholders filing proposals often introduce new ideas that encourage improvements to governance, risk management, disclosure, and performance at their companies through effective engagement.   According to the Interfaith Center on Corporate Responsibility (ICCR), about one third of ICCR member proposals are withdrawn because they produce effective engagement. Part of that engagement is dependent on the ability of shareholder proponents to persist for a second or third year, if necessary, to continue engaging with board, management and fellow investors.

Myth: Silencing the voice of a significant minority of investors in the shareholder proposal process would pose no harm to companies and their investors.

Reality: The minority voice in company governance often identifies emerging risks and prevents board and management from jeopardizing a company’s future.

Shareholders that in aggregate account for 3% or 6% of voting investors may hold a significant view that proves accurate and prescient in identifying company risks. For example, 5% of Monsanto investors supported a proposal to require the company to assess the looming public health risks of its product glyphosate; within a few years, it appeared that the liabilities associating glyphosate with cancer causation are expected to drive Monsanto’s purchaser, Bayer, into bankruptcy. [6]

Myth: Raising the filing or resubmission thresholds would constitute
“modernization” of the proposal process to reflect current times.

Modern conditions that did not exist when the shareholder proposal rule was initially adopted do not merit raising the filing or resubmission thresholds. In fact, modern market conditions merit lowering the bar for filing and for resubmission.

•  The average holding period for stocks has shrunk. Whereas in the 1950s, investors bought and held for decades, by 2004 average holding period was 6 months. Even passive investors experience significant annual turnover of their portfolios. According to one study, half of the companies in the S&P 500 Index are expected to be replaced over the next decade due to mergers and acquisitions and other changes in the index constituents.[7]

•  Encouragement of diversified portfolios is contrary to higher filing thresholds. The current threshold requires a shareholder to maintain at least $2,000 in shareholdings in order to be able to file proposals. This places the opportunity for filing of shareholder proposals within reach of an individual with average holdings. But, increasing the amount of shares to be held would conflict with the goal of ensuring that Main Street shareholders seeking active engagement also maintain a diversified portfolio by limiting the number of companies in a small shareholder’s portfolio.[8]

• The growth in multi-class share ownership distorts vote counting. Undoubtedly, if the CEO, board, and other insiders oppose the proposal, they will vote against it. In many cases where companies have multi-class share structures, company insiders represent a majority percent of the vote (while owning far less in economic stake of the company). A shareholder proposal opposed by management at multi-class companies may never have a fair opportunity to reach threshold vote levels. For example, the 2018 shareholder proposal at Alphabet (which has three classes of stock including an insider class with ten votes per share) seeking to “Give Each Share an Equal Vote” garnered 28% of the overall vote after being resubmitted for several years. However, the filer of this proposal estimates that 87% of non-insider votes supported the proposal.