Correcting the Record of the Proxy Roundtable

The Securities and Exchange Commission held a Roundtable discussion of the proxy process, including the shareholder proposal process, on November 15, 2018.

During the roundtable, participants from the Business Roundtable and Chamber of Commerce made a number of misleading statements. The following charts, courtesy of the Sustainable Investments Institute, will help correct the record on two key issues.

1. Support for social and environmental proposals is rising, not falling. 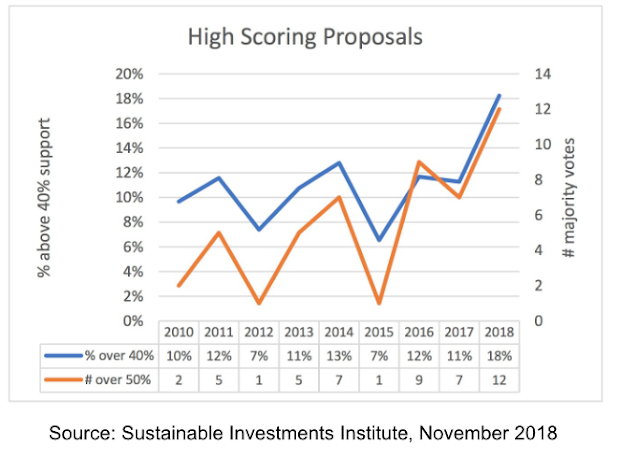 2. The trade associations imply that the fact that some proposals may receive less than 50% support year after year shows they are not appropriate for resubmission.  But shareholder proposals prompt engagement, and sometimes the proponents must persist over a course of years. Some of that effective engagement is demonstrated by the increasing portion of withdrawals.

"The complexity of company policies does not necessarily reflect their adequacy. In order for shareholders to critique existing, inadequate company policies, they need to be specific, yet the   newly applied doctrine seems to stand in their way."

In addition, the report notes that the SEC has this year allowed companies to game the system to avoid proposals, by substituting a company proposal that merely ratifies the status quo, in lieu of a shareholder proposal that seeks change.  According to Lewis, "this undermines the ongoing synergistic relationship between small investors and large.  Relatively small investors can propose governance changes;  quite frequently, the largest market investors will join in support of sound governance measures. But the Staff's treatment of 'conflicting proposals' this season undermines  the rights of those investors to propose governance changes."

The report is available online at http://shareholderrightsgroup.com

The SEC is blunting investor activism over climate, K-cups and gay rights

The SEC is blunting investor activism over climate, K-Cups and gay rights By Steven Mufson April 9 Washington Post Shareholders battling corporate management over everything from greenhouse gas emissions to discrimination to wasteful K-Cups are finding it more difficult to put their proposed proxy resolutions to votes as a result of new guidance issued by the Securities and Exchange Commission. The SEC has widened the definition of “micromanaging” and business relevance, and on three occasions this year sided with companies that have refused to put proposals on shareholder proxy ballots. Read full story

Ken Bertsch, executive director of the Council of Institutional Investors, said his group disagreed with recent SEC decisions allowing companies including electric utility AES Corp to craft their own rules on the right to call special investor meetings, in place of versions proposed by shareholders.

"AES is playing games with this," Bertsch said in a telephone interview late on Thursday, adding that existing guidance from the top U.S. securities regulator should have been enough to protect the resolutions.

The council, whose members include big pension funds and asset managers like BlackRock Inc and Vanguard Group, raised its concerns to the SEC directly in a Jan. 31 letter seen by Reuters.

Under Chairman Jay Clayton the SEC has taken steps seen as favoring businesses, such as allowing companies to confidentially file paperwork for initial public offerings. Clayton said at a November conference he hoped to reconcile concerns about the cost of shareholder resolutions with the corporate governance improvements they can bring about.

* * *
Shareholder resolutions have taken on a new importance as fund firms seek money from investors concerned about climate change and corporate governance.

The SEC has already taken steps that could raise the bar for filers, such as allowing more resolutions to be skipped as "ordinary business."

The [resolutions] were filed by independent investor John Chevedden. Both called for shareholders with at least 10 percent of shares to be able to call special meetings, which can put pressure on management.

The companies requested SEC permission to leave the proposals off their proxies. Each company said it planned instead to offer shareholders a resolution to set the special meeting threshold at 25 percent of shares, a higher standard that could protect executives and directors.

The SEC sided with AES in December, and with CF on Jan. 30, saying Chevedden's measures conflicted with the management proposals.

***
In an interview, Chevedden said shareholders could logically vote for both standards to see which had more support. Now, he said, shareholders would "only get to hear management's side."